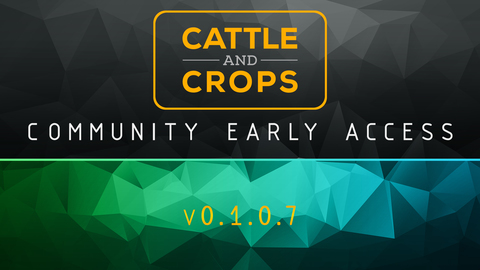 Todays Update v0.1.0.7 is the foundation for the steam release. After this release we will only fix important bugs. After that, this version will be available on Steam on 02.13.2018.

The following new features are waiting for you:

Autopilot drives to Waypoint: You can now add waypoints on the mini-map with a right click of your mouse. If you start the autopilot (default key “N”), the vehicle will automatically drive to this destination as long as you are in it. You can also use this feature to navigate to the next waypoint during a mission.

Info-Popup: If you hold the ALT-KEY you get more information about the fillLevel of tanks and vehicles. There will be a more detailed overview in the user interface soon.

Analog Control: It is now possible to use your mouse to control analog functions of your vehicles and machines. You can assign five buttons in the control settings. The first button controls Quickslot 1 and 2, the next 3 and 4 and so on.

Fieldwork-Employee now works better with save games – he will not do his work inverted when loading a savegame.

Driving behaviour: We have further reworked all machines regarding their suspension and vehicle physics. All tractors now have a slightly spring-suspended rear axle to simulate the suspension effect of the tires. Implements like the plow are not permanently hydraulically re-adjusted when in the ground. The machines now run on the ground on the support wheel/roller and the rear hydraulics in a floating position.

XP, level system: We now have experience points (XP) for: walking, driving, field work and harvest. When a certain XP stage has been reached, the level is increased. This enables other presets (more possible employees, fields, vehicles…).

Achievement system: You now get rewards for certain activities, for example: ‘Drive 10km’. There are multiple categories. The achievements can be reached relatively fast and are still work in progress. The achievements are not bound to an account, but depend on the savegame profile.

Community questions: Till the end of next week we will also answer your questions from the forum again. We will keep the answers a bit shorter, but in return answer more of them.

All changes, bug fixes and new features you can check out in our changelog as always.

NEW: The player character can now attract or chase off animals
NEW: Achievement system. The achievements trigger early at the moment, the threshold values will be changed later
NEW: Achievements integrated via the mission system
NEW: In the free game you can now also acquire XP without depending on the missions. For example: A walked distance gives you 10 XP per kilometer
NEW: Player statistics are being collected and used for missions. Taken into account is the number of driven and walked kilometers. For the field work it is applied for player and employee how much area has been cultivated, plowed, fertilized, seeded, and harvested. When achieving XP, the level is changed. This enables other presets (more possible workers, fields, vehicles …)
NEW: Points can be defined in the minimap to which the employee automatically drives. When you’re sitting in a tractor and press a defined key, the tractor drives to this point using autopilot. Target points in missions can be approached conveniently this way as well
NEW: Analogue steering of user actions via mouse
NEW: The pressed Alt key now shows infos for all tanks/fill levels of vehicles and feeding troughs
NEW: The distance settings for the level of detail are now adjustable in the graphics options, this means that the higher the value the greater is the distance of popping trees
NEW: Player stats are shown in the menu next to reputation
NEW: Pedestrians added in the Albergtal map

CHANGE: The start and animal feeding mission have been revised considerably
CHANGE: The speed detection is more tolerant now when using cruise control for the field work, it doesn’t complain when you’re driving 0.1 km/h too fast
CHANGE: The employee has been improved: after loading a save game, he doesn’t drive in the wrong direction from time to time
CHANGE: A floating position for the three-point hitch has been implemented for all vehicles. This means more traction and less “getting stuck” for the worker
CHANGE: The notification window is now transparent
CHANGE: The weather system has been reworked – sunsets now look way nicer and the transitions between weather conditions are prettier
CHANGE: For the purpose of a better overview, only the current task is displayed for most of the missions
CHANGE: The Verti-Mix only attracts animals when it unloads. As a consequence, the dog and the cat shouldn’t spend all their time near the implement
CHANGE: The entrance of the residence isn’t so narrow any more and the bedroom trigger has been reduced
CHANGE: More pedestrians in the village, the spawnrate is being reduced at night
CHANGE: The suspension values of vehicles (like Dammann and Jaguar) have been adjusted
CHANGE: Reworking of the suspensions of the MB Trac 1000 and 1400: the rear axles are slightly fit with suspension to simulate the suspension of the tires