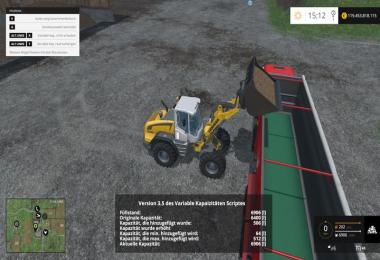 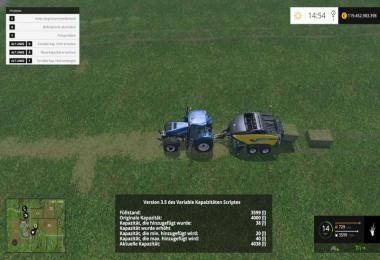 One or the other might already know my Variable Capacity scripts from the LS 13. It is now also available for the new Agricultural Simulator 2015: [M] A global scripts that the capacity of an inflatable device variably changed, so there is always a different maximum level to has. Once more, sometimes less .. me since the LS 09 interferes with the ‘rigid’ capacity yes .. Now I’m ready, I’m trying to remedy this situation with the following script:

The capacity is increased or decreased .. While it may happen that the script used Kapatizität multiple sets equal but you do not always have the same Kapatizität, as is standard only by ‘accident’.
Once the speci ‘fillable’ has, in my script is active. Exception: the mods the Special: ‘variable body’ use!
Texts are Switchable .. the HUD Is closed, two indicators appear in the auxiliary window.

Downloaded the .zip just pack in the Modsordner If you want, you can subscribe and adjust the values in the Fzg.xml. However, this is not mandatory. Just so that you can adapt for each mod as you want.
The XML entry for presses and followers / buckets / feed mixer looks like this:

And at the threshers would look like this:
XML-source code

Version 1.0:
The ‘addTrailerSpezi.lua has been removed. This is no longer required, since the ‘VariableCapacityTrailerShovelRegister.lua’ has been adjusted.
If you have several coupled trailer, and I wanted to disable the Hud or script that is now done only in selected trailer and no longer at all. <- This is the main reason for the new version ... Store image made ready (completely forgot .. In version 0.9). Zip is somewhat more attractive. Version 2.0: The new capacity is set set again, if you disable the script and re-enabled. Before the original capacity was since adjusted easily. The capacity of newly-set is now saved. Fruits are at: trailers, shovels, loaders and seeders queried. Wherein the value which is added to the maximum is greater than the value, for example, in the potato is at, for example wheat. (<- Pure Dancing on my part .. ^^) I also got back a little busy with the HUD me. Behind the figures is a "[l]" has been added for 'liter'. Also you can see now in the help window, if the capacity was increased or decreased or not. It is now possible via key combination (ALT + links etc.) that can calculate a new capacity and then stop with the same key combination. The prerequisite for this is that the device is already somewhat filled and have not yet reached maximum capacity. Version 3.5: LS 15 Ready New HUD IFKO [coordinator] Modding world Authors: Ifko[nator] www.modding-welt.com zzz_VariableCapacity.zip – 44 KB