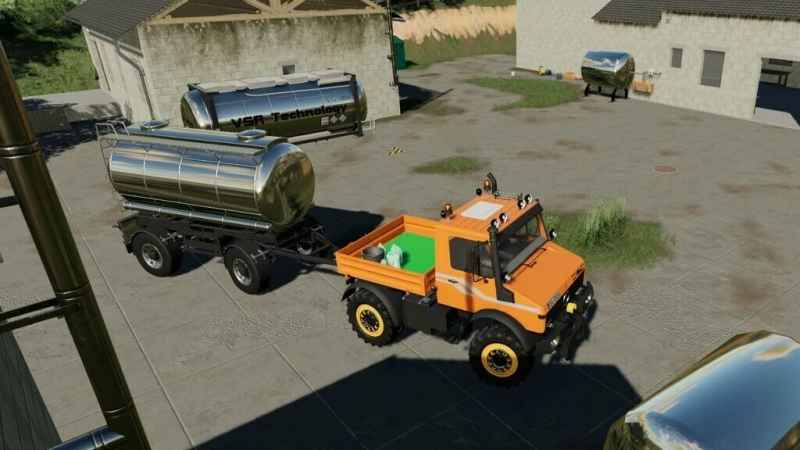 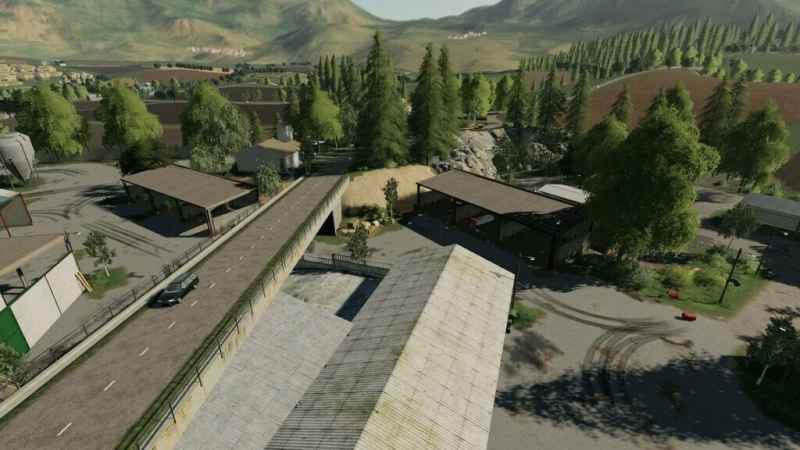 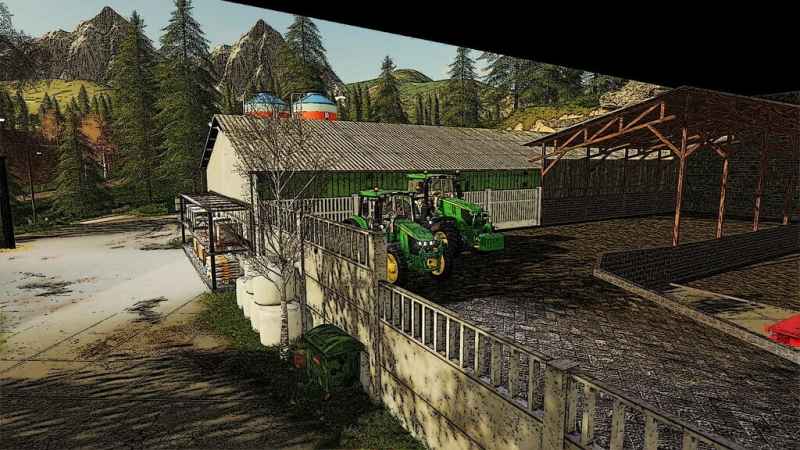 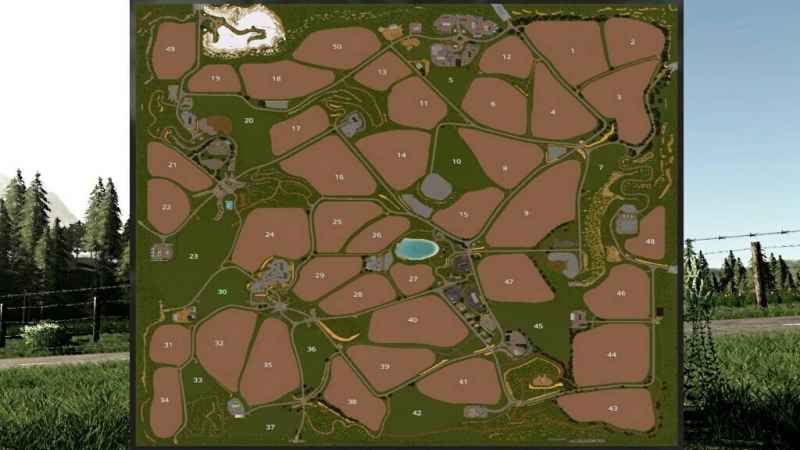 Description:
The Chambergo Valley, a totally imaginary place, in which you will be the owner and lord of a farm, where you will only have to worry about bringing your lands to the highest yield, you will have
Silos and Warehouses to store all your crops and products to improve the performance of your land. In addition, you will have the challenge of giving life to 4 large animal stables located on the map.
Apart from the cultivation of Tomato, as a great novelty in this map, you will be able to enjoy dairy sheep, yes, you read that correctly, Sheep’s Milk, so treat them well !!

Map content:
– Pre-Installed Farm.
– 4 Pre-Installed Animal Stables, Cows, Horses, Pigs and Sheep.
– Land to build your own farm and place your favorite buildings.
– 50 fields of all sizes and with the possibility of joining them
– 8 forest areas of various sizes
– Winding terrain and great decoration.
– 3 Silage Bunkers.
– 1 Biogas
– 1 Biomass Bunker
– Great variety of points of sale for all your products
– Product Purchase Points to take your fields to the highest performance
– More than 20 factories integrated into the map, thanks to the FillTypeConverter script.
– Storage for bales, thanks to the ObjectStorage script.
– New types of crops.
– Vehicles adapted for the cultivation of Tomatoes, Carrots, Onions.
– Support for crop destruction.
– Support for Maize Plus and Horse Extension.
– Standard Support for Seasons Mod.
– Support for DLC Addon Straw Harvest.
– Support with own Terrain mapping for Precision Agriculture DLC.
– Sawmill with Crane.
– Ready stations.
– Custom map lighting.
– Animated objects.
– Pedestrians and Traffic.
– Multi-angle terrain.
– Compatible with the GtX ‘Store Sales’ mod that adds sale signs and flags.

– All my thanks to the modders whose objects, sounds and scripts I was allowed to use. The list of credits can be found in modDesc.xml in the ‘contributors’ section.

– IMPORTANT: This is a great update with great improvements and new implements, so it is Very “Recommended” to start a new game !!. If you decide not to start the game
new you must bear in mind that the errors and many of the corrections that have been made will not be solved. Do not be discouraged, it will be worth it !!

– The capacity of the Ropa combine was adjusted, adapted for the new products, now it will have 2 configurations, 45,000 and 60,000 liters of capacity.
– Field fertilization bug was fixed.
– Some floating objects were relocated.
– Tomato growth and harvest has been added. (Seasons)
-The organic compost is only “effective” if you play without the Precision Farming DLC ​​activated.
– Modified the preview images of the map in both game modes.
– The trigger of the Fertiberg point of sale has been adjusted.
– Now you can sell Fertilizer, Seeds and Organic Fertilizer in Fertiberg.
– Adjusted and modified all properties and starting vehicles in all game modes.
– The entire lighting system of the Main Farm and Pre-Installed Animal Corrals was improved. Before the streetlights seemed to be on throughout the day.
– Now you can see the SeedMaster and FertiMaster that are installed on the farm.
– Adjusted the sounds of the entire map.
– More trees were added in different areas of the map.
– Added more greenery.
– Added new animation to the map.
– Fixed teleportation to Biogas. Now you will not be trapped.
– The sale price of Purín in the Biogas returned to normal.
– Improved textures of the store icons on various objects and placeables.
– Improved animal feeding.
– Chickpea and Lentil crops will act like Soy Beans. (Precision Farming)
– The possibility of all the silos of the Default Farm has been added.
– Placeable Sheds have been added.
– Silos and placeable tanks have been added for the vast majority of products.
– Now in Multiplayer mode, only the owner of the land where they are located can use the factories and their respective shelves for products.
– In Multiplayer mode, Organic and Mixed Trash bags are owned by Farm 1.
– Fixed the FertiMaster production error.
– Fixed the production error of the BiogasMaster.
– Adjusted the Ketchup can shelf output trigger.
– Added a new Traffic Spline.
– Added Pedestrian Spline in the North Zone of the map.
– The prices of most of the products that can be sold have been adjusted.
– New point of sale of products in the Garden Center.
– From now on, animal pens already placed on the map cannot be removed. You can sell the land where they are located, but not the corral.
– Now you can sell the land of the Main Farm, without having to sell everything that is stored in it.
– The TMR and PigFood Mixers were removed from the map
– The Hay and Straw Blowers have been removed from the map. They were replaced by warehouses without animation.
– New Silos were added to store products in the main farm.
– Streetlights have been added to all factories and important places on the map.
– 2 new factories have been added to the map, you will find them already placed. Rapeseed Oil Production and Cucumber Garden !!.
– Now you can produce your own Mixed Ration and Pig Food using the TMR Master and PigFood Master, which you can place wherever you want.
– The corn will have 3 states of Dark Green to be chopped and in turn, only 1 state of grain harvest.
– The tomato will no longer appear in the contracts, to avoid that they provide us with the wrong machinery.
– The plastic boxes used to transport Methanol (Red) and Sweetener (Blue), will be used only for Rapeseed Oil and Cucumber.
– The amount of cost of Compost per hectare has been lowered when spreading it in your fields.
– New vehicles and starter tools.(New Farmer)
– A new product was added: Additive, which will be used for the production of Mixed Ration and Pig Food.
– The price of the land where the stables of cows, pigs and sheep are placed was reduced.
– New categories have been added in the store to make it easier to locate the vehicles, tools and objects included in the map.
– Sheds were added to store all kinds of square bales.
– Biomass bunkers will become Silage.
– A new machine was added to make biomass.
– New tanks were added to transport all kinds of liquids.

We use cookies on our website to give you the most relevant experience by remembering your preferences and repeat visits. By clicking “Accept”, you consent to the use of ALL the cookies.
Cookie settingsACCEPT
Manage consent

This website uses cookies to improve your experience while you navigate through the website. Out of these, the cookies that are categorized as necessary are stored on your browser as they are essential for the working of basic functionalities of the website. We also use third-party cookies that help us analyze and understand how you use this website. These cookies will be stored in your browser only with your consent. You also have the option to opt-out of these cookies. But opting out of some of these cookies may affect your browsing experience.
Necessary Always Enabled
Necessary cookies are absolutely essential for the website to function properly. This category only includes cookies that ensures basic functionalities and security features of the website. These cookies do not store any personal information.
Non-necessary
Any cookies that may not be particularly necessary for the website to function and is used specifically to collect user personal data via analytics, ads, other embedded contents are termed as non-necessary cookies. It is mandatory to procure user consent prior to running these cookies on your website.
SAVE & ACCEPT