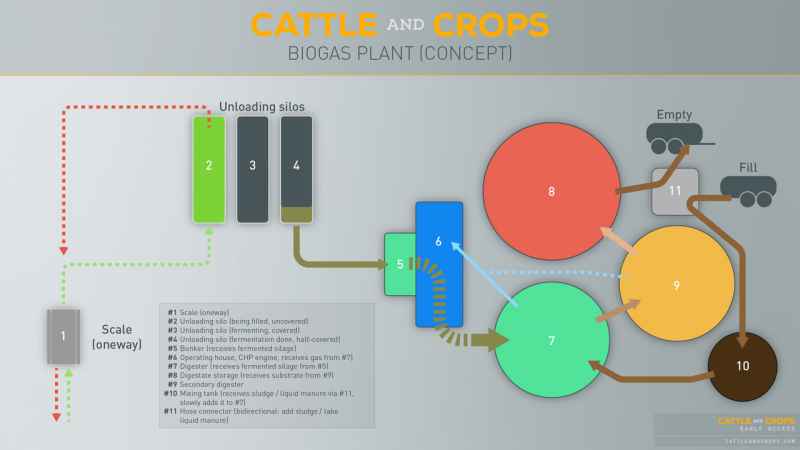 The current condition of the biogas plant (BGP) is limited to the basic sale of chaff. We know how important a BGP is for the gameplay and have decided for a step-by-step feature implementation.

In the long term, the BGP will consist of various stations: the bunker will transport the silage to the digester, which will supply the CHP station and its connected power generator with methane gases via the secondary digester and thus contribute to energy generation. It will also transport liquid manure into the digestate storage container using an overflow system, which can be emptied into liquid manure barrels with a hose.

In the long run, there will be certain elements that can be controlled by the player. Keeping a BGP efficient and productive can be a complex task, so we won’t include these controls until later and as part of the difficulty system.

The first part will focus on a simple fermentation and manure generation process in the next update. This means: unloading into the silo, compacting, covering the silo, letting it ferment and shovelling it into the bunker. The quantities shovelled into the bunker are rewarded financially after processing. As a player, you don’t have to operate the BGP yourself, nor does it need any start-up times and can’t die off. The remaining elements of the process (gas and digastate production) are automated.

The second stage will extend the complexity of the BGP. There will be certain parameters that will contribute to a better (or worse) plant performance and effectiveness. Here, for example, the quality of the chaff and the degree of fermentation come into play. In addition, it will be possible to improve the nutrient supply to the bacteria using the mixing tank for sludge supply. At this stage it will also be important to be able to see the current status and progress, so a dedicated BGP window will provide information.

With the last expansion, the player will gain complex control of the BGP. Many more parameters and optimization possibilities will be included, allowing you to get the maximum out of the system – and of course a higher yield.

As mentioned at the beginning, the elements of the BGP will be adjustable by the degree of difficulty. Those who prefer a more simple gameplay will be able to as much as someone who has always wanted to control a system without having to go to college for it.